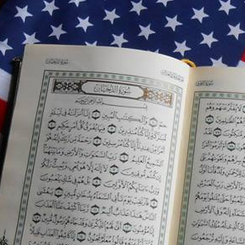 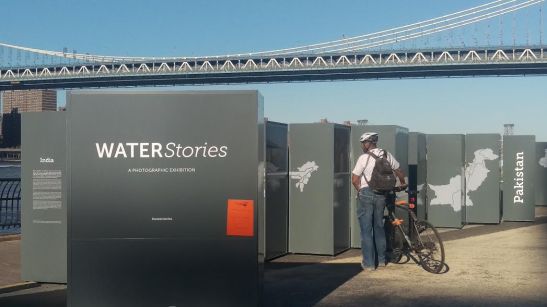 NbA Muslims are engaged in multifaceted forms of activism to raise awareness about the global water crisis and the need to safeguard invaluable water supplies. Last month, world-renown photographer Mustafah Abdulaziz opened his Water Stories: The Global Crisis in Pictures exhibition. Presented as part of the festival Photoville in Brooklyn Bridge Park,  NY, Water Stories is a collaboration with the HSBC Water Programme – a partnership between HSBC, Earthwatch, WaterAid and WWF.

The array of large-scale photos prominently displayed on light boxes laid before viewers a powerful narrative of the struggles that people around the world undergo to obtain a vital human resource.

Abdulaziz elaborated to NbA Muslims his motives for choosing water as the primary subject for his extensive project:

Water is a fifteen-year project, begun with the understanding that water and humanity were moving towards a crisis. We live in a time when 650 million people have no access to safe drinking water; when our rivers, basins and lakes are affected by decades of industry; when rising sea levels are placing Pacific Islanders in the cross-hairs of becoming the first climate refugees. The complexity of our relationship with water reflects our greater behavior towards our environment. Only now are we understanding our impact on our planet. Too often water has been addressed only in crisis, only in lacking and not as an intertwined topic that stretches between the literal and the interpretive. By spotlighting the ways in which we behave towards our resources, the project sets the stage for viewers to see themselves in a greater global dialogue. This is the future of the work: unifying water as both a physical resource and a conceptual idea.

When thinking of water, we often don’t realize it’s importance in the rituals and religions of our planet. The concepts inherent in water are clear: purity, rejuvenation, renewal. The religions of the world all incorporate these notions into the very fabric of their beliefs. Two countries in the exhibit and project itself come from a shared history: Pakistan and India. After independence from colonial power, they split into two countries with different beliefs, that of Muslim Pakistan and Hindu India, in one of the largest migrations of people in history. What fascinates me is the common need, regardless of faith, inherent in water. Further, it’s present in the purification process before prayer in Islam and in Hinduism, is a major component in pilgrimage and reverence in the form of the Ganges River. There is a universal constant that makes water move beyond the need for survival and towards a very personal and powerful connection between people and their world.

The photographs from New York City were made as a way to connect the world water crisis to viewers in the city that is hosting the exhibition. Documenting New York City’s water issues will take time, and in the time this will feature prominently in the project Water. It was my hope that these pictures, vignettes of many different interactions across the city, will provide New Yorkers with a presence of mind to see themselves within a larger global dialogue. The large aerial photograph of Manhattan, surrounded by its two rivers, serves as a symbol of just how beautiful and relevant water is to New York, and a reminder to the people of this city that they are a part of a greater challenge.

Water Stories: The Global Crisis in Pictures is on display at Brooklyn Bridge Park, DUMBO, New York City until October 12, 2016.

Abdulaziz’s work reflects the commitment that many NbA Muslims have to encourage people to become more cognizant about conservation and sustainability.  The Muslim Anti-Racism Collaborative (MuslimARC)  recently launched the #SupportStandingRock initiative to highlight the struggle in North Dakota, where Sioux people at the Standing Rock Reservation are fighting to protect their water from potential contamination via the construction of the Dakota Access Pipe Line.

During MuslimARC’s first national call on #SupportStandingRock, program director Margari Aziza said, “This is a liberatory project that can free us all. Thinking about the harm to the environment and the harms to sacred lands and what the protectors are defending at Sacred Rock, this is about all of us. We can stall off some of the environmental damage and move into a new generation of sustainable living.”

Water conservation is a significant issue for humanity, and lack of suitable drinking water jeopardizes the lives of people every day.  The activism of NbA Muslims to conserve the human water supply demonstrates Islamic principles about conservation and sustainability and the essential link between the faith and a precious natural resource.

This entry was posted on October 1, 2016 by Layla Abdullah-Poulos in Uncategorized.